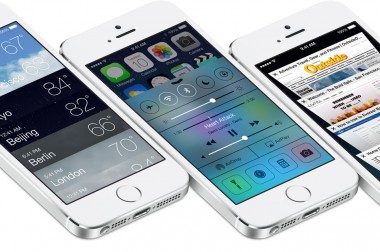 The latest iteration Apple’s mobile operating system, iOS 7, debuted on Wednesday morning as promised, bringing with it what CEO Tim Cook has described as “the biggest change to iOS since the iPhone.”

A complete reimagining of the operating system on which the iPhone, iPad and iPod touch run, iOS 7 is Apple’s first truly post-Steve Jobs product — one imagined and architected without his guidance and persistent refinement. It’s a reconceptualization of the OS that aspires to unify Apple’s vision of hardware and software into a holistic experience, and it’s the result of the new era of collaboration at the company that began last year with the ouster of former iOS chief Scott Forstall and the elevation of Jony Ive to SVP of design.

IOS 7 is a watershed moment for Apple, as Cook explained at D11 earlier this year.

“We (asked Jony to work on iOS) to really amp up collaboration,” Cook said. “Because, for us, and I think this is particularly true in the post-PC era, is that the key for having a great killer product is to have incredible hardware, incredible software and incredible services. And combine those in such a way that you can’t tell what’s what anymore it becomes an elegant consumer experience. And the real magic occurs at the intersection of those. … We recognized that Jony had contributed significantly to the look and feel of Apple over many, many years and could do that for our software, as well. And I think (the result) is absolutely incredible.”

A hyperbolic characterization, but reviewers seem to agree. As our own Walt Mossberg said in his iPhone 5s review, “There are too many new features in iOS 7 to list here, but it’s a big improvement.”

Indeed, it’s almost like getting an entirely new iOS device — not just for all the new features Apple has built into it, but because they’re all designed to hew to a single design vision and hit that intersection Cook describes above.

Read the full article from its original source: http://allthingsd.com/20130918/ios-is-here/